Women's History Month Doesn't Have To Be About History

Women’s History Month is the time of year when we look back on the whole of history and tell the stories of women who shattered the glass ceiling. Names like Cleopatra, Joan of Arc, Rosa Parks, Clara Barton, Ruth Bader Ginsburg, and Princess Diana come to mind. These were women in the public eye. They are very much giants in history. However, it is important to note that glass is easier to shatter when it is already cracked.

Women contribute to the ever-changing culture of our world every day and continue to add cracks in the glass ceiling for current and future generations. This is why, for Women’s History Month, we chose to talk about women both past and present who embody a spirit of possibility and positivity.

From the past, we honored Ruth Bader Ginsburg, Katherine Johnson, and Rigoberta Menchu Tum. 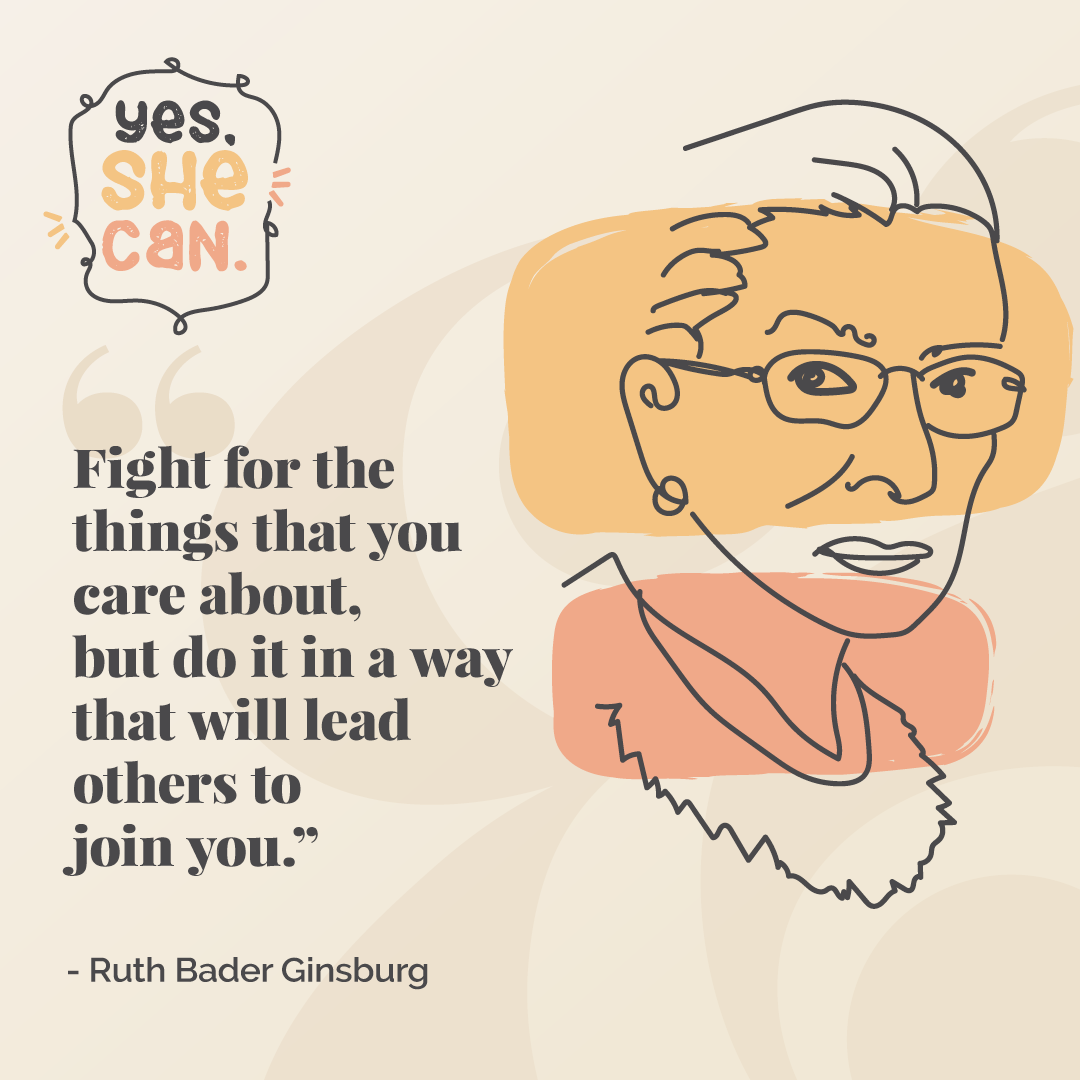 The case that gave Ruth Bader Ginsburg the power to change the conversation on gender equality was the 1972 tax case of Moritz v. Commissioner. Ginsburg knew that it would be hard to convince a courtroom of predominantly, if not exclusively, men of discrimination against a woman. That is why this case was so important; the law was discriminating not against a woman, but a single unmarried man taking care of his mother asking for a tax deduction allotted only to women. Ginsburg knew that if she won this case, she would have a foundational argument against sex-based discrimination, and win, she did. Following this case, Ginsburg overturned 178 laws that discriminated on the basis of sex. 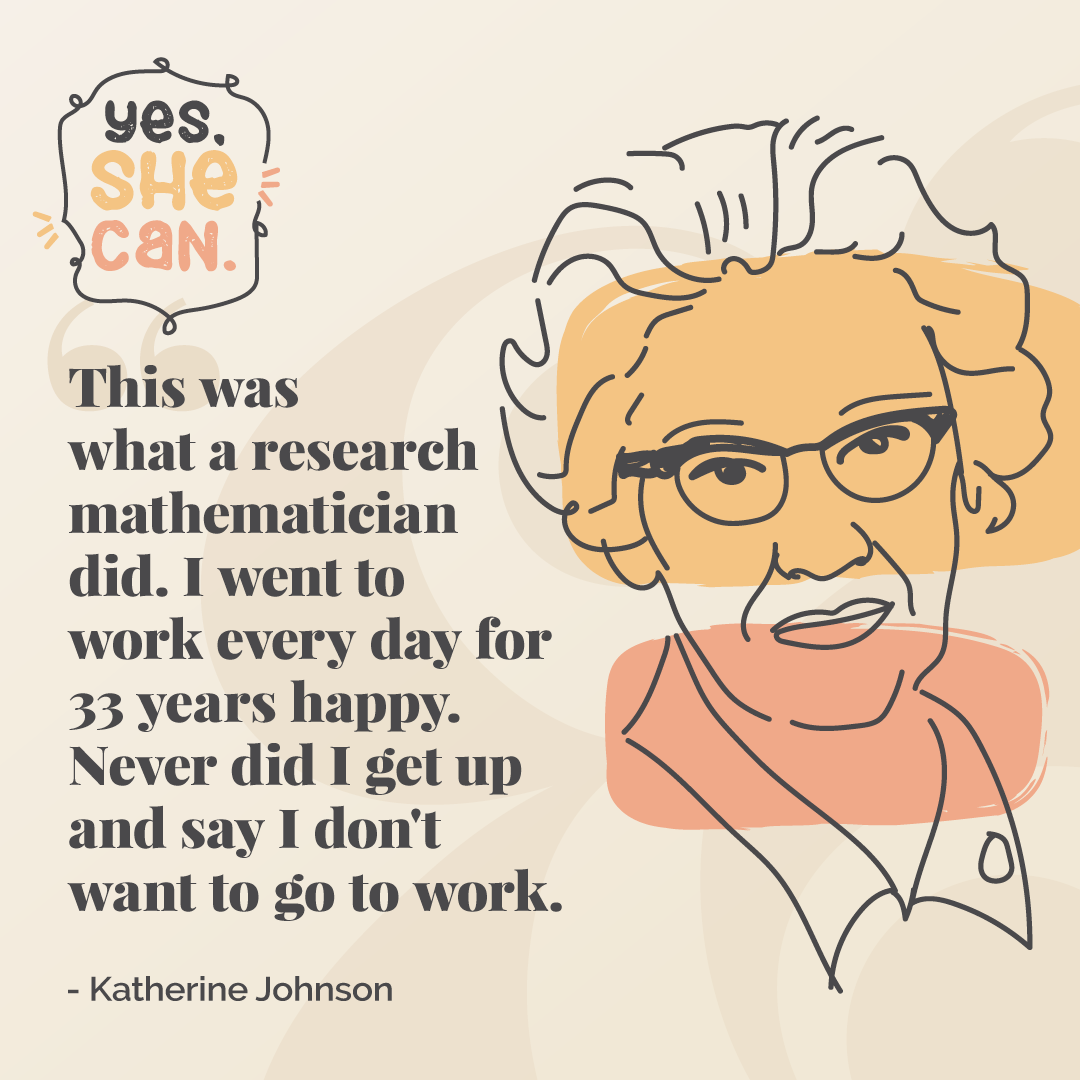 Katherine Johnson was a trailblazer in both higher education and STEM. Her path was riddled with adversity as she not only experienced sex-based discrimination but racism as well. Johnson was the first female African American graduate student to integrate at her alma mater’s, West Virginia State College, graduate school. Johnson had a love of learning, especially math. That love of learning took her far in her career and she went on to become the crucial computer in the success of the Apollo 11 mission. Her positive demeanor and relentless pursuit of knowledge opened many doors for her and countless women after.

Rigoberta Menchu Tum grew up in a country marked by violence. She and her family peacefully protested those in power. As a result of their opposition, the army killed her family and she had to flee to Mexico. In Mexico, she met a European human rights group fighting in Latin America. With their help, she continued her fight against the oppressive Guatemalan regime abroad. Her work helping the indigenous people of Guatemala gained her much notoriety and today she continues to champion human rights issues for indigenous people across Latin America. Her unrelenting faith in a better life for herself and a better country for her people has made her an esteemed diplomat.

We are also showcasing just a few of the brilliant women of Yes& in a series of videos featuring conversations we've had with one another over the past month.

Taking time during Women’s History Month to celebrate your female employees is important. According to the University of Warwick, happy employees are 12% more productive than their counterparts. Recognition in the workplace can contribute to the happiness of your employees.  A survey conducted by Globoforce for the Huffington Post, showed that recognition made 86% of employees feel happier and more satisfied with their jobs.

So, as we close out the month, we recognize the importance of carrying this appreciation and admiration with us throughout the year by continuing to cultivate an inclusive, equitable agency environment.  That’s why, this month and every month, take the time to spotlight your employees.

Reach out to Yes& for creative social media campaigns and employee engagement strategies that will bring your organization closer together and showcase the very best you have to offer.

Carpenter’s Shelter: A Project that Hits Close to Home

It's the people that make the place. The community you feel proud to be a part of and the place you call home. Since 1982, Carpenter’s Shelter has evolved from a small group of concerned citizens into a leader in finding solutions that end and prevent homelessness in our very own community in Alexandria, VA.

DEI in Focus: Show Us, Don’t Tell Us

Forrest Mars Sr. came up with the idea for M&M’s after observing soldiers eating chocolate during the 1930s Spanish Civil War. As you know, heat liquefies chocolate like butter in a frying pan, making your fingers sticky. So, the concept of wrapping chocolate in a hard candy shell was born. With it, came an immortal tagline: Melts in your mouth, not in your hands. M&M’s are practical. They’re colorful. The characters are fun. Did we need them to be anything more?

How Brands Can Communicate Giving Back in an Authentic Way

Have you ever donated or volunteered but felt awkward about telling people or maybe even hesitated to post about it on your social networks? We’ve all been there –maybe it feels…too self-promotional?